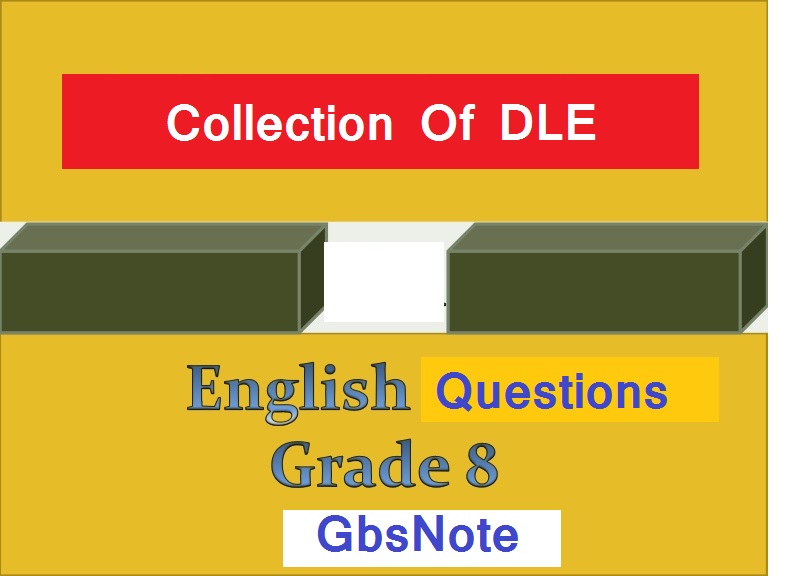 Beside grade 8 DLE English questions you can find other subjects questions in the same site.

A. Fill in the blank spaces with the correct word given in the brackets: (4×1=4)

D. Read the passage carefully and answer the questions given below:

“This show is fast and the stunts are fantastic. It’s so much better than the film! When the plane crahses into the water and explodes, you can feel the heat on your skin!” says David, aged 14, living in Toronto, Canada.

Fourteen-year-old David is describing ‘Waterworld’, a show at Universal Studios, Hollywood, one of the four big theme parks in Los Angeles. His comments appear on a website where park visitors talk about the rides and shows.

There is a lot of competition between the parks. Each one tries to make their rides and shows more and more exciting, which is why people sometimes say that the shows are often more fun than the films!

Universal Studios Hollywood is a working film studio, a role that goes back to the early days of Hollywood. Within it’s gates, the rich heritage of films of the past and all the stars and excitement of today’s Hollywood truly comes alive.

Universal Studios Hollywood is huge. There are live shows, rides, restaurants, shops and exhibitions where visitors can look at the props used in films. The rides are based on popular films such as Back to the Future, Jurassic Park and The Terminator.

Visitors can take tours to see where films and television shows are made. They can also find out how the studio makes rainstorms, snow and fog.

The first-timer favourite is the tram tour, during which you can experience the parting of the Read Sea, an avalanche, a snowstorm, and a flood; meet a nine-metre-tall King Kong; be attacked by the killer shark of Jaws fame; survive an all-too-real simulation of an earthquake that measures 8.3 on the Richter scale, complete with collapsing earth’; and come face to face with a scary Egyptian mummy.

The trams have audio and video systems and the guided trip circles the 415-acre complex all day long. This tram ride is usually the best place to start, since it is on the lower level of the park.

Advertisements for Universal Studios Hollywood say that this is ‘where everything that happens in the films happens to you’.

Anyone who has dropped down the 24-metre waterfall at the end of the Jurassic Park ride might agree that this is true!

ii. Fill in the blanks with the appropriate words from the above text: 4×0.5=2

Sir. – for me the events of last weekend were a reflection of some of the problems of society today.

On Saturday afternoon I attempted to stop a robbery at one of my local shops. No one came to my aid during my endeavors; now I have a black eye and broken ribs.

The apathy and disinterest of bystanders shocked me. The four youths responsible for the robbery made their escape in a Volvo, which suggests that it is easier to make a dishonest living rather than an honest one. The shop-owner has shown no interest in my well-being and a no gratitude for my attempt to protect his property.

I suppose I am fortunate that my injuries are not more serious, but I have found the experience saddening. When will the public stop turning a blind eye to such events; actively help to prevent them; and take responsibility for factors – such as high unemployment which lead to this sort of crime? – Yours sincerely.

props,  coaxed,  bridging the gap,  breakthrough, to turn a blind eye, to out of his mind.

This show is fast and the stunts are fantastic its so much better than the film when the plane crashes into the water and explodes you can feel the heat on your skin says David, aged 14 living in Toronto, Canada.

Three man pass through the forest ¾a bag of gold ¾ agree to divide it ¾ they become hungry ¾ one sent to buy food ¾ plot to murder him ¾ returns ¾ murdered by his companions ¾ they eat the poisoned food ¾ conclusion.

Importance of Peace for Development

Make a brief characterization of the following characters.

iii. From among the plays you have read so far choose the one which you like most and write the short message it conveys. 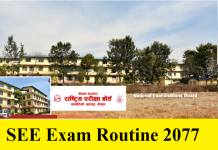 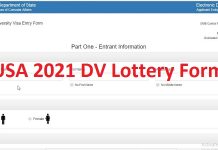 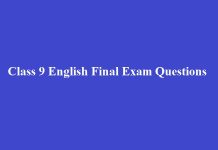 Working in the United States